Explore all services for Hazardous Waste in London

Lead Based Paint Disposal in London

Batteries are used for a range of reasons around the house and the workplace in London and with 1,240,767 active businesses and 3,560,000 residential properties London has the highest rate of energy consumption in the UK.

However, batteries are one of the most misplaced waste types and are often found mixed in with general waste which is a problem, they contain toxic chemicals and heavy metals which creates environmental issues, such as contamination and water pollution.

If your business in London produces battery waste, several pieces of legislation affect the storage, collection, and recycling of battery waste and it is your duty of care that all batteries are stored correctly on your premises using a battery recycling box, which makes proper battery disposal easier.

How do I recycle batteries from my business in London?

If your business premises in London produces battery waste, you should not put them into the general waste bin, you need to keep them separated and collected under Hazardous Waste consignment procedures.

The European Waste Catalogue (sometimes referred to as the List of Wastes) contains the following entries for batteries:

When disposing of batteries in London, it is advisable to segregate them into different categories. Professional waste contractors offer specialist collection services for consignment batteries and will do this for you. Upon completion of the collection they will also supply a hazardous consignment note in compliance with the Hazardous Waste Regulations 2009 (England and Wales).

The best waste management option for all battery waste is to recycle them. Several pieces of legislation affect the storage, collection, and recycling of battery wastes produced in London. It is your duty of care that all battery waste is correctly stored on your premises. The recommended way to store your battery wastes for recycling is by using a battery recycling box. Besides storage, you also need to ensure that the waste is transported compliantly to a recycling facility. Bear in mind that you must be able to provide proof that you have followed all of the regulations of battery disposal and that you have checked the credentials of the waste contractor and disposal/recycling company you work with. It is important that the company is fully compliant with all legislation.

What are the risks associated with battery recycling?

The following are some of the risks associated with battery disposal.

There is a risk that batteries can cause fires when they are disposed of, especially when they are mixed in with other domestic waste material. There have been incidents of fires caused by batteries placed in the household refuse. Disposing of batteries in the general waste can also lead to the risk of injury to refuse workers and the public from fires and explosions. Local authorities or a battery recycling service you hire can provide a separate battery recycling box for you to put your battery waste into. It is also highly advisable that you safely dispose of your batteries at recycling points.

2. Ecosystems and water pollution
Improper battery disposal has potential toxic risks, which is associated with the emission of battery chemicals into aquatic ecosystems. Careless handling of battery waste can result in the release of dissolved metals and corrosive liquids that are harmful to plants and animals. Incorrect battery disposal in landfills can lead to the release of these toxic substances into groundwater, as well as the environment.

3. Contribution to the emission of greenhouse gases

The manufacture and transportation of batteries, particularly non-rechargeable batteries, emits pollutants into the atmosphere and contributes to the greenhouse effects. Waste electrical and electronic equipment (WEEE) is one of the fastest-increasing waste streams in the world. The most common battery type used in portable electronic devices is Lithium-ion batteries, and their use is expected to double in the coming years. With all the risks posed by battery disposal, recycling is the best solution. Battery recycling, particularly lithium-ion batteries will help reduce greenhouse gas emissions, reduce energy consumption, and result in substantial natural resource savings when compared to landfill.

What you need to know about London 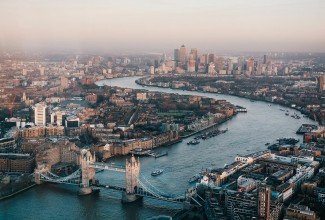 An ancient settlement that grew up along the banks of the Thames, London is one of the most well established and influential cities in the western world. It has reinvented itself many times throughout history to become the vibrant dynamic and complex entity that it is today with an infrastructure that is constantly developing to accommodate the progress and advancements of modern day Britain. It is well known for being one of the most integrated and culturally diverse cities in Europe, and accommodates many ways of living that make it stand out as a place that not only celebrates diversity but thrives on it. The pull of London for so many people from around the world and its increasing population demand a waste management industry that is highly organised, adaptable, and available for public use. Waste transfer companies have a large share of a market that is constantly in need of rubbish removal services, and the amount of businesses operating within this industry drives competition and a range of services that can overwhelm consumers and organisations when choosing a contractor for their rubbish disposal needs. One of the most important considerations when choosing a rubbish removal service is their commitment to the environment, re-use and recycling practices, and a diversion of waste from landfill. This can be achieved by companies who operate within statutory frameworks, practise due diligence, and adhere to the rules and regulations set out by the environmental health agency.

What are the different ways to dispose of waste in London?

Numerous waste facilities can be found around the city, from recycling centres, to energy recovery centres, and landfill sites. Local Authorities provide recycling centres for residents for recyclable and general waste, and these council run facilities provide the same basic services from borough to borough. Some types of waste, like building materials, are often classed as restricted by the councils and residents are only permitted to dump small amounts for it to be considered domestic waste. Many councils also provide competitively priced services for the collection, transfer and disposal of commercial refuse, although large amounts of waste and industrial waste would need to be disposed of through larger waste management companies such as Veolia and Viridor. These waste management corporations also work closely with many of the local borough councils in London to transfer recyclable waste and take it to treatment facilities around the UK or to to be sold on

Where are the nearest recycling centres in London

What rubbish collection services are available in London?

Many councils in London offer bulky waste collection, such as mattresses and sofas, for free or for a fee. The average charge is £28 - £29, but some councils charge more or charge less than this amount. The most expensive council is Richmond upon the Thames (£60), followed by Hounslow (£50), while the cheapest are Barking & Dagenham (£10) and Greenwich (£10). However, there are also London Councils that offer the service for free, such as Tower Hamlets and Newham. The average response time for a council that provides bulky waste collection is 2 weeks. While most people can bring their own waste to the nearest site or use the local council to collect the waste, there is a little bit of preparation needed. For instance, checking what rubbish the waste facility deals with, finding the right vehicle to transport it, and finding out whether you need a permit to do so. To dispose of your rubbish a lot easier, you can use our service to take care of the task for you, all the way from the collection to responsible disposal. Wayst provides rubbish removal service for numerous areas in London, including Bromley, Dartford, East London, Ilford, North London, and surrounding areas.

Need help with a waste clearance in London? Get in touch

How are the local authorities in London handling your waste?

Over the years many local authorities have risen to the challenge of effective waste management for the millions of people living within the 32 London boroughs. Councils have come together to form alliances and pool their financial resources into state-of-the-art materials recovery facilities and the reclamation of landfill sites by the natural world.

In London there are the following authorities that have been setup to handle waste public waste management activities:

ELWA (East London Waste Authority) which has been set up between Redbridge, Havering, Barking & Dagenham and Newham.

NLWA (North London Waste Authority) which has been set up between Barnet, Enfield, Haringey, Waltham Forest, Camden, Hackney and Islington.

WLWA (West London Waste Authority) which has been set up between Hillingdon, Brent, Harrow, Ealing, Hounslow and Richmond-upon-Thames.

WRWA (Western Riverside Waste Authority) which has been set up between Hammersmith & Fulham, Kensington & Chelsea, Wandsworth and Lambeth.

SLWP (South London Waste Partnership) which has been set up between Merton, Kingston upon Thames, Croydon and Sutton.

Along with these authorities Veolia ES UK, DSO, Amey, May Guerney and Serco are just some examples of the private waste contractors who work alongside the councils to manage waste more efficiently.

At the service level, organic waste removal services such as home composting caddies and garden waste collection are now standard practice for many London Boroughs seeking to avoid the use of landfill sites. Residents are given brown or grey bins specifically for food waste including meat, fish, and poultry waste, which is collected periodically alongside general rubbish. The organic waste is taken to facilities where it will undergo treatment such as pyrolysis or gasification which are both methods used to heat organic waste at controlled temperatures in order to produce by-products such as oil, char and gas that may be used as fuel. These controlled heating methods are relatively new, although they are in the commercial stages of development, and composting remains the most widely used method for recycling organic waste materials collected by Local Authorities in London and the surrounding areas.

What are the plans for a greener future in London?

In recent years London has made many efforts to become an environmentally friendly city and has adopted a practice known as ‘urban greening’ which aims to bring purpose built green spaces into the infrastructure of the city, helping to lower temperatures, prevent flooding and improve air quality. With the population in London set to increase by an estimated 3 million by 2050, and with permanent changes in the weather due to climate, urban greening is mandated to become a key part of building in the city as it expands. This consists of planning permission for green walls and roofs as standard practice for any major developments. The urban greening factor is included in the New London Plan which is the spatial development strategy for Greater London led by the Mayor of London and the Greater London authority. Other aspects of urban greening are set to include the ‘healthy streets’ initiative, which will not only change the physical environment of London’s streets and pedestrianised areas, but intends to shift public behaviour towards greener methods of travel such as walking and cycling, and increased use of public transport for long journeys. The ‘grey to green’ project as part of the sustainable drainage action plan also encourages communities to advocate for an increase in accessible green spaces by communicating with the local council about where such improvements could be made.

Battery Recycling in Kingston upon Thames