Explore all services for Hazardous Waste in East London

Batteries are used for a range of reasons around the house and the workplace in East London and with 8,599 active businesses and 826,941 residential properties there is a high battery usage in East London.

Battery recycling is extremely important for East London as it aims to reduce the number of batteries being disposed of as municipal solid waste, increasing East London’s recycling rates. However, batteries are one of the most misplaced waste types and are often found mixed in with general waste which is a problem as they contain toxic chemicals and heavy metals.

As there are many types of batteries and recycling processes, battery recycling can be a confusing process, which is why companies need to hire a professional battery disposal company in East London who can deal with your battery waste correctly.

In East London how do I recycle batteries from my business?

If your business premises in East London produces battery waste, you need to keep them separated in a battery recycling box and have them collected under Hazardous Waste consignment procedures where they will be segregated into different categories.

Several pieces of legislation affect the storage, collection, and recycling of battery wastes produced in East London and it is your duty of care that all battery waste is correctly stored on your premises using a battery recycling box. Bear in mind that you must be able to provide proof that you have followed all of the regulations of battery disposal and that you have checked the credentials of the waste contractor and disposal/recycling company you work with.

What you need to know about East London 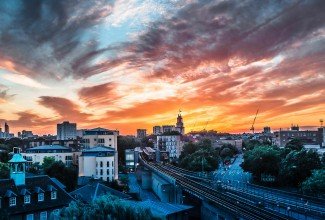 East London has traditionally been known as the centre for manufacturing and trade in the city. Less wealthy than west central areas, people have historically come to this part of London to work in the docks and factories along the banks of the Thames. The work was often incredibly arduous and in dangerous conditions that wealthy neighbourhoods wanted kept away from the city centre. Bone processing, rope making, tanning and gunpowder making were among some of the early East London industries that would have resulted in fumes and air pollution in the area, and fish farms and slaughterhouses would have contributed to putrid odours that would have made much of east London unpleasant to live and work in. The Victorian era of industrialisation also affected the quality of living conditions for London’s East Enders, as many workers from outside the city were bought in resulting in overcrowding and crime as many working-class communities struggled to make ends meet. After the second world war, many of London’s East End industries died out making way for new housing developments, improved standards of living for working class communities, and more social mobility. Nowadays, East London’s Canary Wharf is the home for banking and finance in the city, generating and bringing in vast amounts of wealth to the area. Shoreditch, Dalston and Stratford have been regenerated in recent years and are now considered to be young, trendy, and affluent with many bars, clubs, and pedestrianised shopping areas characterised by quirky independent shops such as those found on Broadway Market. Although it is still the industrial heart of the city, East London has experienced a huge amount of development in recent years from housing to business investment and a growing number of digital technology start-ups. Suppliers and manufacturers now conduct much of their business online and have extended their reach beyond the city, increasing their revenue and economic value. East London based building contractors provide thousands of jobs in construction and related industries in and around the city, and waste disposal in London is another essential service that provides employment for hundreds of workers in the area.

What are the different ways to dispose of waste in East London?

Rubbish disposal services like other businesses are fast becoming digitised, allowing them to enter the global market and provide far reaching commercial and domestic solutions for waste management, whilst caring for the environment.15 of the best waste disposal sites in East London can be found in Hackney, Shoreditch, Whitechapel, Barking, Leyton, Woodford Green and Thames Wharf, and offer a full range of rubbish collection and refuse services including house clearance and independent skip hire.

Where are the nearest recycling centres in East London

Barking and Dagenham, which is one of the largest boroughs in East London runs the Frizlands Lane reuse and recycling Centre on Rainham Road in North Dagenham, Gerpins Lane RRC in Havering, Chigwell Road in Redbridge, and Jenkins Lane recycling centre in Newham. These sites are only available to residents living in an East London Waste Authority (EWLA) borough and proof of address such as a council tax bill or driving license is required to access the site. Frizlands Lane also accepts cash payments from residents outside the ELWA for using the facility, bearing in mind that there are often long queues outside as this facility, along with the other aforementioned sites operates on a first come first served basis.

What rubbish collection services are available in East London?

East London Councils provide free and competitively priced household waste services for residents, although the provision may vary slightly between boroughs depending on the local authority and the rate of council tax paid by people living in the area. Aside from general non-recyclable rubbish collection, Council run rubbish removal services in East London provide standard recycling collection, assisted rubbish collection and clinical waste collection services free of charge. Most Local Authorities in East London also provide organic waste disposal caddies for food waste. Garden waste collection normally needs to be paid for and is usually available as a subscription service. Bulky and large item collection is also a fee-paying service unless the council has a special arrangement for specific items such as free fridge/freezer collections.

Need help with a waste clearance in East London? Get in touch

How is the local authority in East London handling your waste?

What are the plans for a greener future in East London?

In terms of their commitment to the environment and sustainability, many start-ups and SME’s in East London are leading the way, even though it is often more costly for them to do so. With one entrepreneur recently featured in the Made In Shoreditch website for launching a campaign to start the first zero waste, plastic free shop in the area, to tech companies like Bulb, who now provide over 1 million homes with renewable energy, environmentally friendly businesses represent the future both on and offline.

Independent businesses that seek to consider the environment as a key part of their business strategy are also becoming extremely popular with consumers as we continue to notice the adverse effects of manmade climate change. The loss of natural habitats for so many marine and land animals because of rising temperatures and noticeable shifts in seasonal weather patterns is made all the more painful for regular consumers who often have no choice but to opt for single use plastic. The simple lack of choice and provision from big supermarket chains generates huge amounts of nonrecyclable waste which is fast becoming untenable, and this is something start-up companies in east London are capitalising on to pave the way for real commercial and environmental change.